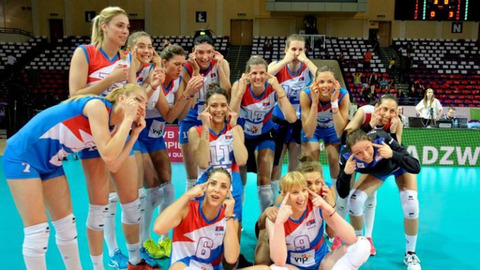 Serbian Women's Volleyball Team Celebrates Win With Offensive Photo This is not a good look. The Serbian women’s volleyball team struck a distasteful pose after beating Poland over the weekend. The win secured Serbia’s place in the 2018 FIVB Women’s World Championship, and to celebrate, the team posed for a group shot where most players are seen pulling back their eyes. The gesture, historically used to mock people of Asian descent, is presumably in reference to the 2018 championships being held in Japan. The photo, which was originally featured in an FIVB story about the game, has since been removed, according to Deadspin. But that doesn’t mean people were OK with the photo’s brief appearance.
【セルビアの女子バレーボールチーム 「日本人の目は細いｗ」と馬鹿にして大炎上】の続きを読む